“Genesis 1:3" video shows how astronomers explain the way the universe began. It is the idea that the universe started as just a single point called singularity. About 13.8 billion years, singularity exploded then rapidly expanded outward at the speed of light (186,000 miles/sec.). As the universe continued to expand, it also cooled and matter condensed eventually forming our stars, galaxies an planets. 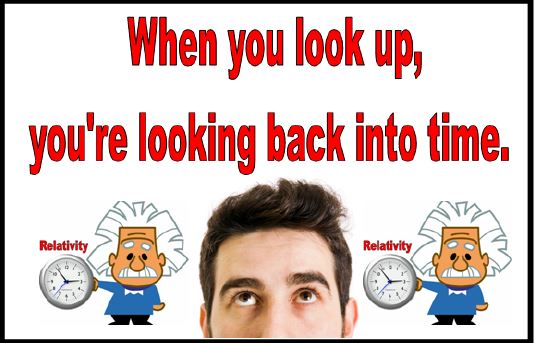 Most people think Einstein's Theory of Relativity is a really hard scientific concept that only smart people can understand, but they are wrong. Just remember these three simple scientific facts:

When you look up into space, you are looking back in time;

Some people like to think of a telescope as our window to the universe. Being a physicist with an active imagination, Einstein viewed a telescope as a time machine: When you look through the telescope's eye lens toward light coming from space, you are actually looking back into time. Here is how it works.

Next to the sun, Alpha Centuri is earth's closest neighboring star. At a distance of 24 trillion miles from earth, it would take a beam of light leaving Alpha Centuri right now 4.367 years to reach the earth.

Using today's most powerful radio telescopes, scientists can now look far back into the distant past at light that left the most distant galaxies over 13.1 billion years ago.

In 1963, two scientists, Arno Penzias and Robert Wilson, discovered what Is now called the Cosmic Microwave Background Radiation, the original light leftover from creation when the universe was only 380,000 years old. At that time, stars and galaxies had not yet formed. The baby universe consisted of a hot soup of electrons and atomic nuclei. These particles constantly collided with super hot photons that made up the background radiation, which then had a temperature of over 3000 C.